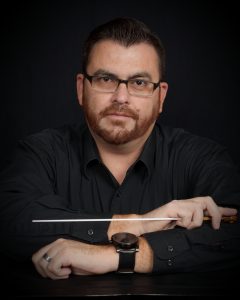 Phil Vallejo has also been a volunteer for the California Band Directors Association Convention, serving as a Band Manager and Assistant Convention Host, since 2004. In 2013, Phil began to serve in the position of Convention Host/CASMEC Coordinator for the California All State Music Educators Conference (CASMEC) and has continued his service to the conference.  Now in his 15th consecutive year of service to CBDA and CASMEC, Phil continues to grow and learn new ways to serve the state of California.

Phil Vallejo holds a Bachelors of Arts Degree in Music Education, as well as a Masters of Arts Degree in Music Performance, both from California State University, Fresno. While at California State University, Fresno, Phil was able to study with great teachers and musicians such as Dr. Lawrence Sutherland, Dr. Gary P. Gilroy, Dr. Matthew Darling and Mr. Allan Kristensen.  As a performer at Fresno State, Phil Vallejo was a member of the wind ensemble, jazz band, symphonic band, chamber singers, concert choir, percussion ensemble and marching band.

Phil Vallejo is an active adjudicator and is the current percussion Judge Coordinator for the PPAACC, SVWAA, CVGPC and SJVCGPR organizations.

In his spare time Phil enjoys hanging out with his wife Courtney and their 3 beautiful children, as well as playing basketball and racquetball.